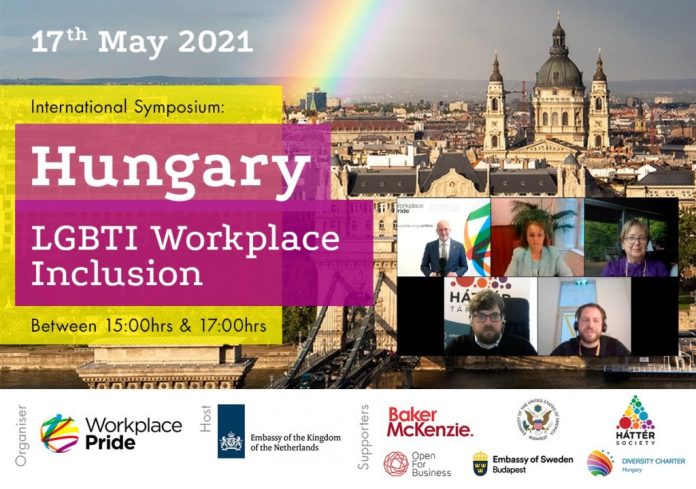 This conference which was hosted by the Embassy of the Netherlands in Hungary and took place on IDAHOT day (May 17th, 2021), addressed a broad range of issues when it comes to LGBTI inclusion in the workplace.

The Symposium was opened by René van Hell, Ambassador of the Kingdom of the Netherlands to Hungary. He emphasised the significance of IDAHOT and how united the European Union is in achieving the goal of raising awareness of human rights violations against the LGBTI community. The Ambassador also noted that Josep Borrell, High Representative of the European Union today had published a declaration on behalf of all EU member states to support this goal.

The Ambassador prefaced that today’s symposium on Hungary would focus mainly on the business rationale for creating LGBTI inclusive workplaces. It would demonstrate how both business and society could benefit from a more open and inclusive approach to this community.

Next, the Netherlands human rights Ambassador, Bahia Tahzib-Lie gave her inspirational thoughts on the importance of creating open and inclusive workplaces. On May 17th she had the honour of raising the rainbow flag at the Dutch Ministry of Foreign Affairs in the Hague and calling for equal rights for LGBTI people in all spheres of life.

Next, David Pollard, Exec. Director of Workplace Pride and moderator for the Symposium spoke about milestones achieved globally with marriage equality. This issue directly and positively impacts the LGBTI community in the workplace and can usher in positive change in company policies.

Mr Pollard polled the live audience on Hungary. To the question “What is the most effective way to create LGBTIQ+ inclusive workplaces in Hungary?”. The majority voted (74%) that employers should take the initiative over other choices such as lobbying or Civil Society taking the lead.

“Employers across the world have begun to understand the economic advantage of creating workplaces where LGBTIQ+ people can openly be themselves. This is important for the recruitment and retention of new employees. Increasingly, younger generations, both LGBTIQ+ and non-LGBTIQ+ people, demand equitable workplaces from their employers – otherwise, they gravitate to employers where everyone CAN be themselves.”

Next Andrea Solti, Country Chair for Shell,spoke about “Corporate Priorities in a Challenging Market”. Ms. Solti explained how Shell has implemented its D&I standards in Hungary since 2002 and has had yearly D&I targets since then. These standards have helped create a workforce and board of directors that is gender-balanced. Shell has also signed the European Diversity Charter in Hungary as they feel support for this important agenda must also be external. In closing, Ms. Solti strongly emphasized visible leadership, being responsible for an open and safe work environment and being a role model, and intervening if needed. At Shell, the “learner mindset and psychological safety is the cornerstone of Shell’s leadership framework”.

Next, George Perlov from Open for Business gave a fascinating presentation of a recent study on LGBTI inclusion in Hungary, Ukraine, Romania and Poland. The biggest finding from this report is the cost of LGBTI discrimination in these countries. An estimate of 0.23% to 1.75% of annual GDP based on health iniquities (depression, HIV AIDS) and wage pay gaps. To give some financial context, Mr. Perlov explained that the cost of public broadcasting for a year in Hungary was equal to the loss in GDP due to LGBTI discrimination. LGBTI rights data showed that an increase in rights directly correlated to an increase in GDP gain per capita.

Mr. Perlov also showed evidence that national reputation around LGBTI rights can and does have an adverse effect on foreign investment which has been seen for example, in Poland with a backlash against their “LGBT Free” zones initiative and same-sex adoption. In the case of foreign reporting on Hungary on such discriminatory issues, the majority of reports are negative.

With data from Linkedin and the World Bank, “brain drain” is affecting LGBTI persons’ choices of where to work in the future in tech, finance, health, education, and science, etc., and are in fact more likely to move and take jobs in more open societies.

Topic: “The current situation for LGBTI people at work in Hungary”

Each of the panelists gave their own unique perspectives on Hungary and what their organisations are seeing and doing to improve the situation.

“Multinationals do want to make a difference, do want to measure and quantify diversity. But there are limitations to achieving that in Hungary in terms of local law and GDPR(types of data and context etc.) but this is an ongoing discussion” Ms. Radmilovic

“IKEA has policies which are compatible with local laws. Encouraging your co-workers to be engaged, join activities/support etc. while representing the company. From there we go into the discussion with the customers. It’s easy in a way to communicate and ask a question but its important to be prepared in advance for the reaction be it positive or negative.“ Mr. Bojko

“A lot of companies need to have courage. Our role is to work against unconscious bias and simply never give up!” Ms. Czako

“24% of Hungarian LGBTI people were discriminated against in the workplace in the past twelve months, for transgender people it was 42%” Mr. Dombos

For the second poll to the live international audience the question was :

“What next step do you feel would have the most positive impact for the LGBTIQ+ community in Hungary?”. The viewers voted in a majority that  Hungarian companies become more vocal over other options such as international businesses withdrawing their investment or EU institutions imposing sanctions.

The second and final panel :

“It’s not only about words but it’s about deeds and what implications those deeds have.”

“It’s not only about laws but how you reach the hearts and minds of people and do you interact and deal with your unconscious bias.” (René van Hell)

“When you live in the EU or a NATO country, we’re part of a value-based community, and standing up for diversity and LGBTI rights is part of that”

“In Sweden, we sharpened anti-discriminatory laws to have active measures to promote equal opportunities and rights”- Katarina Szesci-Asbrink

“All employers, businesses, and organisations are obliged to work on these structural issues because there is no quick fix.” –Katarina Szesci-Asbrink

“This a long-term effort in the United States. The roots of our anti-discrimination framework goes back to the 1964 civil rights act. We need to go beyond the legal and regulatory framework and look at what is here in our own organisations.”

In terms of gender identity and sexual orientation, we need to find a way each person can live to his or her full potential in contributing to the workplace. And that’s a positive commitment”