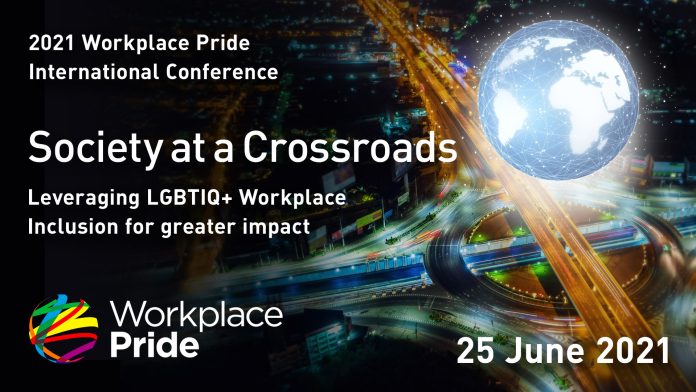 In the wake of a tumultuous 2020 where countless social norms were deeply affected by the global pandemic, Workplace Pride made the difficult decision to hold a truly hybrid conference at the Amsterdam Theatre on the 25th of June, 2021.

With a global online audience of over 400 and a live in-house audience of close to 100 Workplace Pride members, the conference opened with a powerful montage of the struggles and solidarity of the LGBTIQ+ communities around the world where there is still so much work to be done. David Pollard, Exec. Director of Workplace Pride opened the conference by touching on the breadth of seismic societal changes that have occurred in recent times. The changes range from the Hungarian government banning any portrayal of homosexuality in education or on television to Poland creating “LGBT-free” zones where LGBTIQ+ people have no protection against hate crimes. In Brazil, legal attempts are even being made to remove “gender” and any talk of homosexuality or transgenderism from school curricula!

Aldith Hunkar, journalist and TV presenter was the moderator for the event and the first keynote speaker was Carla Grant Pickens, Global Chief of D&I at IBM. IBM thus far has been a trailblazer when it comes to LGBTIQ+ workplace inclusion. Aldith and Carla discussed the challenges she is facing as chief of D&I at IBM and how IBM itself is dealing with the changes to the workforce and what its core values are.

The first panel of the day was hosted by Co-Chair of Workplace Pride, Bianca Nijhof. She spoke with Rodney Irwin, COO of the World Business Council for Sustainable Development. They were joined remotely by Marcia Balisciano, the Director of Corporate Responsibility at RELX. The discussion focused on the impact of LGBTIQ+ workplace inclusion on investors.

Marcia spoke to Rodney’s words about policies meaning nothing without action adding that RELX feels needs to have the right atmosphere across their organisation. This is accomplished through different training around topics such as psychological safety and allowing people to say what needs to be said.

Aldith was then joined by the CEO of Dow Inc., Jim Fitterling who spoke about the gains a company can have from being more diverse and inclusive.

To the question of the impact of the pandemic and if employees coming back to the office was an opportunity to re-launch diversity Fitterling noted that the motto at Dow throughout the pandemic has been  “Inclusion is not cancelled “. Dow’s ERG’s have been heavily relied upon to keep people connected and move forward. The pandemic provided the company with insights into life and work habits and for example, child care issues or taking care of older relatives.

Lisa van Ginneken, Member of the House of Representatives of the Netherlands joined Aldith on stage to dive straight into Lisa’s efforts around giving transgender and intersex people more say in their medical procedures. She also urged for transitional leave to cater in a similar way to maternity leave and giving attention to the process.

“Large companies have a large power to advocate and I urge them to use that power to enable low-threshold access to transgender healthcare worldwide” said van Ginneken, who added:

Van Ginneken also explained that the Pandemic had affected levels of loneliness for transgender people as well. During the transition, your social circle can shrink and the Pandemic has only exacerbated those conditions along with depression. Also, since healthcare has been focused on COVID-19, transitional healthcare scope has shrunk meaning waiting lists have increased.

For the next panel featured Martine de Vries, Professor in Medical Ethics and Health law and LUMC, Gera Sneller, Coordinator for D&I at the Netherlands Ministry of Foreign Affairs, and Javier Leonor, Global Inclusion & Diversity at Accenture. With the topic of “Leaders’ Strategies at a Crossroads”, the panel gave their thoughts on healthcare and the challenges in particular for the LGBTIQ+ community.

“What we’ve learned is that we need to focus more on specific groups affected and that includes the LGBTIQ+ community,” said Professor de Vries.

For Accenture, the shift to working from home was around prior to Covid but mental health has become a key issue said, Javier Leonor. On a positive note, he also said that some employees had flourished in spite of the Pandemic. Also for transgender colleagues, some of the stress of being in transition in the office was alleviated by working from home.

Gera Sneller at the Dutch Ministry of Foreign affairs gave a very global perspective, highlighting how some areas or parts of the world moved forward with LGBTIQ+ rights but conversely other places saw things worsen during the Pandemic.

With a topic entitled “Intersectionality – A Catalyst for Change”, the discussion centered around the challenges of data representation and what that means for the intersex community in particular, and are we acknowledging that community’s significant difficulties in finding and having employment for example.

The discussion delved deeper into the “framework” of intersectionality beyond the obvious visual characteristics.

“It’s time to apply a different lens when we look at intersectionality. Not just the LGBTIQ+ lens but also generation, race, culture and language, and many more invisible characteristics” concluded Kolman.

This first true ‘hybrid event’ by Workplace Pride highlighted the advantages of being able to gather again in person, but at the same time showcased the ongoing challenges that many LGBTIQ+ people and their employees face in the workplace as a result of the societal changes we are all experiencing. Going forward, Workplace Pride will continue to challenge our members and the community to strive for more inclusive workplaces around the world: together with can choose the right path at this monumental turning point in our history.